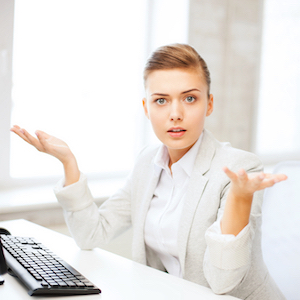 If you and the other person are on different tracks you’ll be tempted to argue to establish your dominance or knowledge of what’s correct or what’s not.

But you know something? The problem isn’t the problem. We all have problems. Problems need to be solved by communicating and mutual respect for each other rather than shouting and/or insinuations or by calling each other names like squid or blur!

When you don’t listen to others, communication breaks down. Listening shuts down. And all you get is a shouting match. Why don’t people listen? Let’s look at some of the things that stop us from listening:

I’m sure you can come up with even more reasons as to why we’d argue with a boss, your spouse, your children, customer, friend or family member. But the problem is…when you lose your temper, you might start to blame the other.

And that puts you into a victim mentality. “You made me do that by being late!” Or “You make me so angry when you keep on changing the subject!” Or, “It’s all YOUR fault, you didn’t tell me in time!”

Have you ever watched “The Arena” on Singapore TV? It’s reality tv where high school students argue and debate against each to score points. Well, that’s on tv. And they have a large audience.

My argument is that you shouldn’t do this at home! Nor at work! Why? Because it makes you hated by the other. A shouting match is only good on reality tv. Don’t do it in real life. You don’t really have an audience to cheer you on.

What can you do when someone shouts at you? Here’s a few things you can do:

Above all, stay calm. The world has many tracks. We will have as many points of view as there are roadways. You don’t have to agree with everyone. Just stay true to your own track. And allow others to have their say.

Compromise, collaborate, negotiate wherever you can. Life, after all, is give and take. It’s a lot better than just arguing!